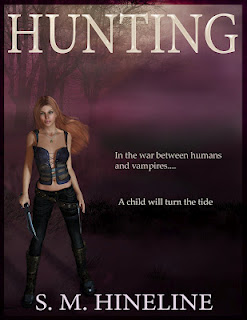 In order to guarantee the survival of the vampire race, Jade, Aldora, Mordecai and Ignatius must form a hunting team--a group that travels once every five hundred years to find a vampire child born of two human parents--the result of an ancient curse. However, their quest isn't as simple as finding the child and bringing it to the palace. Aldora's cousin, Taurean will do anything to prove her unworthy of ruling, even if that means killing Aldora and taking her hunting team too.

Jade has joined the group mind of the vampires in order to experience the first hunt. She is learning what to expect from a vampire baby and how to tell it from a human.

Loud screams and moans emanated from a back room in the little cottage. They followed the noises until they came upon the makeshift delivery room. Jade guessed that the man standing just outside the door was the father-to-be. Two nurses waited inside the room with the expecting mother, ready to assist with her delivery. The woman lying on the bed was propped up by pillows and seemed to be in a great deal of pain. The hunting party’s entrance into the cottage and into the delivery room went completely unnoticed by any of the mortals, and for this Jade was immensely thankful.  The woman’s screams grew louder and the man outside the door paced back and forth; he didn’t have long to wait.

A few minutes after the hunting party entered the room, the child was born. The nurses removed the child from his mother and while one of the nurses held the child, the other cut the umbilical cord and removed the afterbirth from inside the now exhausted woman on the bed. The nurse holding the child took him to a bassinet and wiped away the blood and other fluids. Once the child was cleaned and wrapped in a soft blanket, he was handed back to his mother.  The nurse then went into the hall to announce to the man that he was the father of a perfectly healthy baby boy.

The baby was born and everything appeared to be normal. Jade felt a sense of relief mixed with sorrow. They had found a child, but it didn’t look like a vampire at all. Now what were they supposed to do? Jade feared this memory was not the one with the vampire child, and she was concerned that she would not learn how to tell a vampire baby from a normal, healthy mortal baby. The child’s mother lovingly cuddled her newborn, and offered the baby her breast. The infant took to his mother’s nipple instinctively, as all newborns do, when suddenly the mother began to scream in shock and panic. Jade’s eyes followed the mother’s gaze, and saw what was disturbing her so. The baby had bitten into her breast and was feeding off the blood that was flowing out of the wound. Blood streamed down the woman’s breast and smeared the child’s face.

The two nurses were frantic with fear. They didn’t know who they should be saving—the baby, the mother, or themselves. The child’s father blocked the doorway, so escape was impossible. The nurses in turn huddled together in a corner as far away from the mother and child as they could get. The hysterical women alternated between screaming, crying, and praying before finally falling silent. Jade was glad for their silence, as their panicked noises were starting to make her feel edgy. She turned her attention away from the nurses and back to the mother on the bed. The woman was still screaming and struggling to get the child away from her, though her maternal instincts prevented her from harming her newborn son.

Finally recovered from his shock, the child’s father rushed to the bed and pulled the child from his mother’s breast. Once the child was removed, the extent of the damage to her breast was hard to ignore. The baby, like any child, did not know its own strength and had lacerated the woman’s breast. She continued to scream and cry, and the child, sensing that his mother was distressed, began to cry as well. What happened next sealed the child’s fate. The blood alone could have been explained away or forgotten over time, but the black tears the child cried were another story altogether. The father began to pray while holding his son as far away from himself as possible. The mother cursed the child as a demon and refused to look at it. It was at this point that Cirocco decided to intervene.

Retrieved from "https://huntingbook.fandom.com/wiki/User_blog:S.M.Hineline/SampleSunday?oldid=4101"
Community content is available under CC-BY-SA unless otherwise noted.