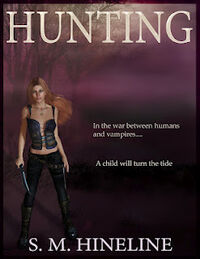 Hunting is a novel by S.M. Hineline. It follows the story of Jade, a twenty-eight-year-old woman who can communicate with vampires, using her mind. This is a gift she was blessed with, and one she didn't ask for. Having known vampires her whole life, accompanying her diplomat father at the Vampire Embassy, she has come to find a best friend in vampire princess Aldora and a close confidant in Mordecai, the vampire-human-werewolf hybrid that serves as the Vampire Embassy's head of security.

In order to guarantee the survival of the vampire race, Jade, Aldora, Mordecai and Ignatius must form a hunting team--a group that travels once every five hundred years to find a vampire child born of two human parents--the result of an ancient curse. However, their quest isn't as simple as finding the child and bringing it to the Vampire Embassy. Aldora's cousin, Taurean will do anything ot prove her unworthy of ruling, even if that means killing Aldora and taking her hunting team too. Read More... 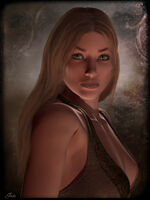 Jade is the protagonist of Hunting and the main human character in the series. She possesses mystical powers such as telepathy and the ability to communicate with other mystical beings such as Aldora.

As the liaison between the human and vampire government, Jade's family plays a large role in the affairs of the vampire kingdom. As a result, she grew up with Princess Aldora and are close friends with the vampire princess as well as Mordecai, the feared half-vampire, half-werewolf. Read more...

S.M. Hineline is the author of Hunting.

Community content is available under CC-BY-SA unless otherwise noted.
Advertisement