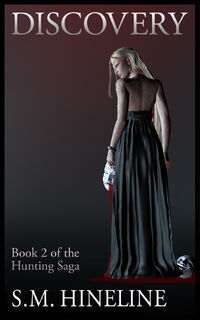 Discovery is the second novel in the Hunting Saga, a series by S.M. Hineline. It picks up where Hunting left off, and follows the group as they deal with raising a baby vampire while trying to help the human police stop a serial killer. The police had assumed the killer was human, but when evidence is found that points to a vampire, the Queen calls in the troops.

If dealing with the police wasn't enough, the Queen also instructs the team to add a new member to their ranks. A vampire who's been sent from the master vampire in Japan named Kitsu Mei. She's tiny, she giggles, and she's obsessed with shoes. Jade dislikes her immediately, but is forced to reevaluate when Gemini seems to like her. That plus standing up to Taurean earns Kitsu some measure of respect from the team.

Retrieved from "https://huntingbook.fandom.com/wiki/Discovery?oldid=4132"
Community content is available under CC-BY-SA unless otherwise noted.